First round of the match play finished

The first round of the Aalto Matchplay championships 2010 has been played with the results shown below.

In group B, the match was very close so that three players, Timo Saarinen, Mika Helenius and Timo Honkela each had two wins and the result was determined by the sum of the winning marginals in each match. 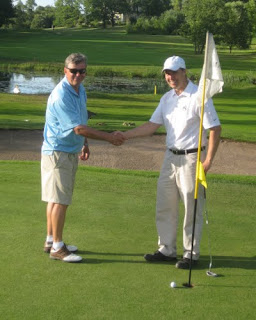 Timo Saarinen and Mika Helenius ended up to a tie and Mika won the extra hole with a fine sand shot that landed one inch from the hole.
Lähettänyt Unknown klo 11.52