The first Aalto University Snow Golf competition took place on Sunday, 6th of March, 2011. The staff challenged students into a competition at the Jämi snow golf course in Jämijärvi. The weather was sunny which enhanced the beautiful views at this unusual golf arena. 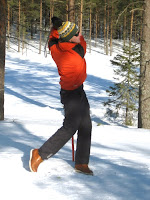 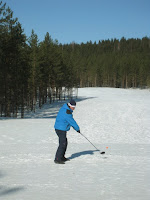 Many of the participants were for the first time at a snow golf course but regardless of that the summerly skills were in good use. On the left, Kari Tikkanen shows his skills in a opening shot at the hole 3. On the right, Timo Saarinen gives an example of a successful drive at the hole 8, a 475 meters long challenge. 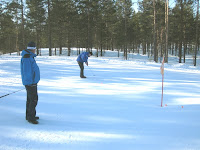 The whites in a snow golf course were in a good shape, thanks to the efforts of the course constructor Hannu Narvi. The holes are to some extent larger than their summerly counterparts and the flag is kept at its place all the time. The speed of the whites was slower than usually due to the snow and temperature conditions. 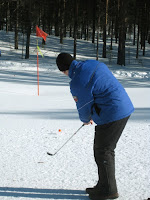 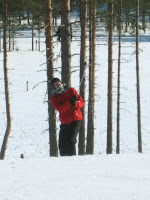 The near game was essential in achieving good results. On the left Heikki Laitasalmi approaches successfully the 7th hole, after a struggle through the 480 meters long fairway. On the right, Alexander Doepel shows that a golfer with only one year's experience can enjoy this kind of sports. 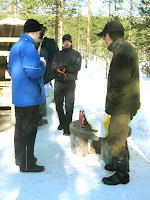 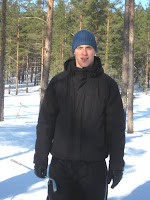 In the end, the results of the competition were considered less important than the time spent together and the chance to enjoy a novel experience. Among the students, the best result was achieved by Joachim Björnström (on the right) who collected 33 bp. One point more was gained by the best among the staff, Esko Penttinen who stands in the middle on the left side photo. Penttinen, Laitasalmi (on the left) and Narvi (on the right) discuss while waiting for the sausages to be ready. The staff won the competition by reaching a slightly better average in the bogey points. The staff had a slight advantage as Timo Saarinen and Timo Honkela had earlier experience of the Jämi course. 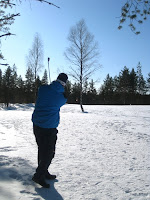 The competition was supported by Martti Kyykoski (Physical Recreation Director, Aalto University School of Economics) and Diswest Golf that provided the orange Srixon AD333 balls. The organizers, Timo Honkela, Mika Pantzar, Esko Penttinen, Timo Saarinen and Yrjö Sotamaa acknowledge Hannu Narvi's efforts - without his enduring commitment to the snow golf course such an event would have not been possible. In spite of the winterly conditions, the course provides all challenges that one can expect, except for water hazards and bunkers. 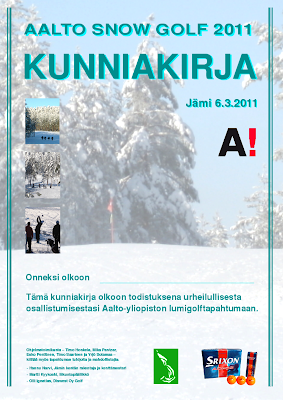